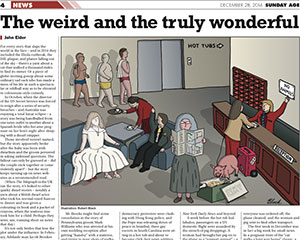 In December I had a chance few in my industry get – to draw a cartoon for Australia’s pre-eminent daily newspaper, The Age.

It came about because one of the paper’s most respected cartoonists had taken up my cause, championing my work to the editors. With things quiet over Christmas, my opportunity came – would I like to illustrate a Sunday column by one of the paper’s stalwarts, John Elder?

My simple brief was to illustrate a column still being written, that would pivot around 5 odd stories that had been in the media that year…

I had two days to turn it around, and they expected some sort of montage – after all, how could such disparate stories fit into one image? But it occurred to me that there was one place they might all cross paths in their stories: a hotel lobby. So that’s what I drew, from the kitchen table of our rented holiday house on Christmas night.

It got a big thumbs up from the editor and writer, and went to press as-is. Here’s the image that appeared on page 4 of the Sunday Age, 28 December 2014… 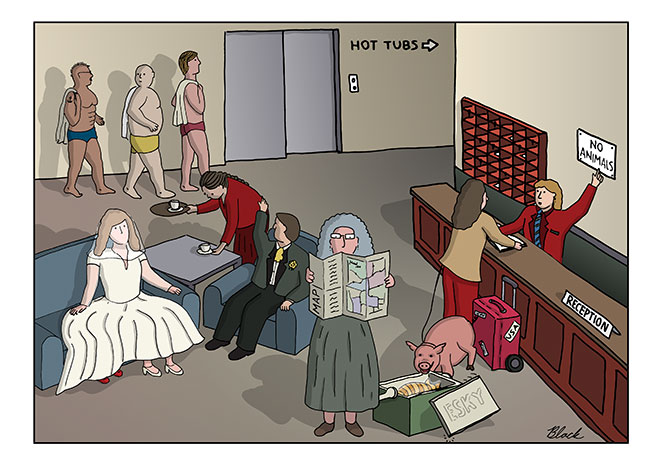 They even used it as the poster outside newsagents around Melbourne. You can read the full article here.

The AGE and my newspaper cartoons
May 2013

The Pencil Sharpener logo, logotype and
all artwork and content on this site are
Copyright © 2000-2021 Robert Black